The challenges of advocating during a pandemic | American Dental Association

The challenges of advocating during a pandemic 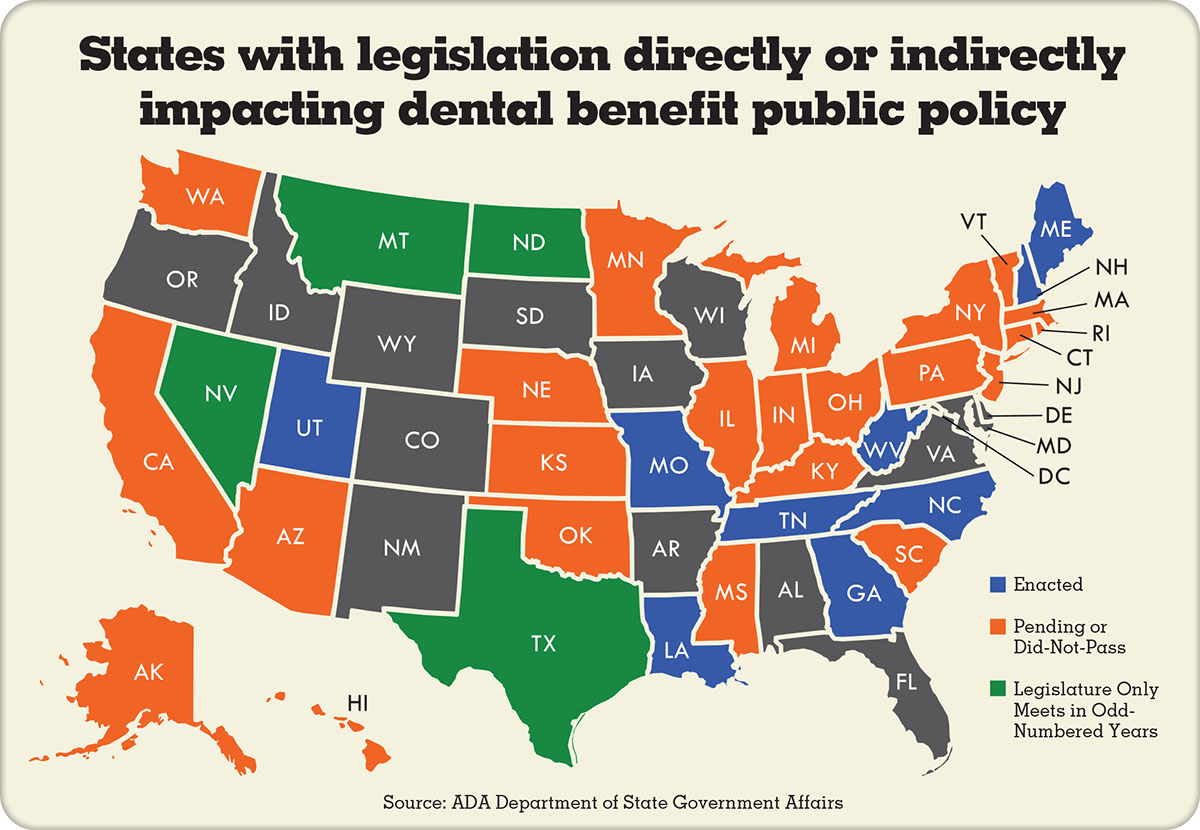 When states began shutting down in March due to concerns over COVID-19, it seemed likely that dental societies’ lobbying agendas would also shut down.


In a normal year, these are some of the key legislative issues the state societies might be advocating to change.

Can you still lobby during a pandemic when a simple handshake is no longer possible?

The answer, it appears, is a resounding yes. But business-as-usual tactics needed to change. Gone are typical face-to-face meetings and trips to state capitals. In their place are new virtual strategies and a return to good old-fashioned phone calls and emails.
“I have been tremendously impressed by how hard our state dental societies have worked to advocate for laws that minimize any interference between doctor patient relationship by dental benefit carriers,” said ADA President Chad P. Gehani. “The staff and volunteer leaders haven’t let COVID-19 stop them from pushing for change, particularly in instances where the doctor-patient relationship is at stake and we are so proud of their successes.”

“Insane is a good word. COVID-19 has turned everything normal, upside down,” said Vicki Wilbers, executive director, Missouri Dental Association, when asked to describe 2020. “Not only when it comes to legislative and regulatory matters but everything that is a staple of association management, from meetings, to membership recruitment and retention, to human resources, to wrecked budgets and more. We are dealing with things I never thought we would deal with in the dental association management and health care world.”

Yet despite the challenges, Missouri Dental Association staff and volunteers celebrated huge legislative victories in July. For instance, Gov. Mike Parson signed HB 1682 that covered a number of topics. First, it improves the state’s credentialing process for health care practitioners by establishing timelines for carrier notifications/decisions. It also requires carriers to pay out claims for services the dentist performed while awaiting carrier approval as long as the dentist is working on behalf of a contracted entity. The law also says a dentist who is temporarily providing coverage for another credentialed dentist who is absent for specific reasons does not have to be credentialed in order to receive payment for covered services.

“Credentialing was a notable concern as the process can be onerous and take months for approvals,” said Ms. Wilbers.

She said the new law specifically concerns emergencies, such as when a dentist with an emergency health situation needs to bring in another dentist to cover their practice temporarily but wasn’t able to get that coverage for patients or be reimbursed without the temporary practitioner being credentialed.

“This caused issues with access for patients as well,” she said. “Now, with the passage of this bill, Missouri dentists can practice under another dentist’s credentials for a period of 60 days for FMLA purposes without having to be credentialed. This also allows for dentists to be reimbursed for covered services provided during a credentialing period.”

Getting a credentialing bill through the state legislature wasn’t MDA’s only success. Also included in HB 1682 was a provision prohibiting carriers from collecting claim overpayments from providers who did not receive an overpayment. MDA also helped to kill a bill that would have reduced carriers’ penalties for late payments.

Ms. Wilbers called her team’s success a happy surprise.
“The fact that the legislative session was shut-down at the onset of COVID-19 and we thought we hit a brick wall, to see these bills pass in the last two weeks of session completely surprised me,” she said. “We have tremendous lobbying support from both internal and external lobbyists. We were a part of the ADA’s State Public Affairs program that also provided us with support throughout the session. These areas as well as several last-minute membership messaging pushes to legislators through a system called Voter Voice, allowed for legislators to hear our members loud and clear, even if it was through emails and virtual means. With these strange times and disruption, comes change and that change can bring opportunity. My entire team — from the ADA, to the state MDA team to the local societies — have all buckled down. We do everything we can, as best as we can, every day — COVID-19 or not — for the members.”

Dr. Gehani believes the new laws aren’t just beneficial for dentists, but for patients as well.

“If you are a subscriber to a dental plan, you may be unaware of what your plan is doing behind the scenes and how that may be impacting your relationship with your doctor,” he said. “The dental societies and the ADA are seeking laws that shine a light on coverage and makes it work in the best way possible. To fully appreciate the profession’s investment in dental benefit public policy, it is worth noting that there have been almost 90 state bills filed this year alone concerning dental benefits. These measures provide a forum to discuss the efforts to improve coverage for patients and build the foundation for future enactments.”

Virtual credit cards
In recent years, many dental benefit plans have shifted from paper checks to electronic methods of payment, which includes paying dentists through something known as virtual credit cards. These types of payments, while convenient, often come with additional fees. Many times, dentists aren't aware that they're being reimbursed in this manner, or that accepting virtual credit card payments comes at a cost.

During a January meeting with a state lawmaker to discuss the dental association’s 2020 priorities, the subject came up, as Dr. Val Radmall, executive director, Utah Dental Association recalled. He and Dr. Glenn Zeh, chair of Utah’s Political Action Committee, met with Rep. James A. Dunnigan, who thought the virtual credit card issue would be a good fit for another bill he was working on.

The strategy paid off. In March, Utah Gov. Gary Herbert signed into law HB 37 that says dentists may now opt out of these types of payments. The law also prohibits carriers from requiring providers or patients to accept remittance through a credit card or other similar arrangement.

“We knew many dentists had made efforts to avoid virtual credit card payments, but were frustrated with dead-ends or cumbersome applications to opt out,” Dr. Radmall said. “The UDA has a small board and staff. It wasn’t until [the ADA’s Fight Insurer Interference Taskforce] made information available in such an organized and easy to understand manner that we had the tools to approach legislators on the subject. Now that the bill has passed, we need to educate the dentists that they can opt out and help them know how to make it happen. Building relationships with influential legislators and being bold enough to ask for help from those that can bring about change was our key to success.”

Assignment of Benefits
The West Virginia Dental Association successfully advocated for passing assignment of benefits legislation this year. The law requires dental carriers to pay dentists directly when patients instruct their plans to do so. To ensure transparency, the law requires dentists to inform patients that assignment is optional and additional payments for care may be required. Legislators in that state saw assignment as a good way to help patients maximize their choice of dentist and reduce hurdles to getting dental care. Gov. Jim Justice signed SB 279 into law March 25 following its near-unanimous passage in the legislature.

Richard Stevens, executive director, WVDA, said the decision to advocate for this particular legislation began over a year ago.

“Our officers decided more than a year ago that we’d launch a campaign to enact an assignment of benefits law, and the ADA helped us design the law and develop supporting resources,” Mr. Stevens said. “We started in January and on the last day of the session, day 60 in March, the bill passed.”
West Virginia also helped get its members an increase in reimbursement this year.

“It’s a 10% increase in benefits and that’s also a win for us,” said Stevens, who added that the legislature approved enhancements to the state’s emergency-only adult dental Medicaid program. Adult enrollees will now have access to a wider array of basic services under a $1,000 per patient annual expenditure cap. A few urgent services expenses will not count against that cap.

Downcoding
In Louisiana, Gov. John Bel Edwards signed HB 353 in June prohibiting downcoding by third-party payers unless certain criteria are met. The new law prohibits “systematic downcoding with the intent to deny reimbursement otherwise due to dentists” and requires third-party payers to disclose downcoding policies that are routinely applied. It also says that state-regulated plans must specify in their explanation of benefit notices sent to patients the reason for changing the procedure code that was originally submitted by the dentist and identify policy provisions that permit the change. The explanation of benefit notices may not state or imply dentists have acted inappropriately, if a different procedure code is used for adjudication, unless there is clear evidence to the contrary. The bill was one of two dental bills signed by Gov. Edwards in June.

Waiting periods
In Maine, Gov. Janet Mills signed into law a bill that eliminates insurance waiting periods in dental insurance plans for children in the state. LD 1975, An Act to Facilitate Dental Treatment for Children, enacted on March 17, enables children with private dental insurance to receive care without having to wait up to several months for coverage to start.

“This bill was of particular interest to me because waiting periods have had a direct impact on my own patients’ ability to access dental treatment when they were in pain but couldn’t afford treatment,” Dr. Jonathan Shenkin, a pediatric dentist practicing in Augusta, told ADA News in May. “Eliminating waiting periods after enrollment for children is just one more way to ensure children get proper care.”

According to the law, which does not include orthodontic treatment, it prohibits insurers that issue individual and group dental insurance or health insurance that includes coverage for dental services from imposing a waiting period for enrollees under 19 years of age.

“An important aspect of being a member of organized dentistry is that when times are tough, we band together for the greater good of the profession,” said Annette Droddy, executive director of the Louisiana Dental Association. “When we found out there was an opportunity to move forward with the two pieces of insurance legislation, our leadership decided that it was in the best interest of our members to do our best to see how far we could take these bills, even in a COVID-shortened session.”

“The past few months advocacy has taken on a virtual aspect that no one could have imagined previously. Virtual meetings became a regular occurrence almost every day,” Dr. Radmall said. “The information coming from the ADA was extremely helpful. The ADA’s efforts to influence Congress and other government agencies was non-stop. The ADA’s efforts to simply educate through updates and create resources was incredible. No other entity has done anywhere near as much for dentistry during this pandemic.”

Dr. Gehani agrees wholeheartedly, lauding the state associations around the country that have viewed COVID as an opportunity to work on their priorities by actively pursuing legislation now or prepping for sessions in 2021.

“COVID does not mean that oral health problems have stopped progressing. Patients know this and are returning to the dental office and utilizing their dental coverage,” he said. “Making dental plans work and work well for patients and providers is a top priority. In addition to legislative advocacy, the ADA is also helping members through individual member support, education and endorsement of various industry solutions that solve problems related to dental benefits.”

For more information on the ADA's principles for model legislation, which state dental societies can use in their legislative efforts, visit ADA.org/advocacy.