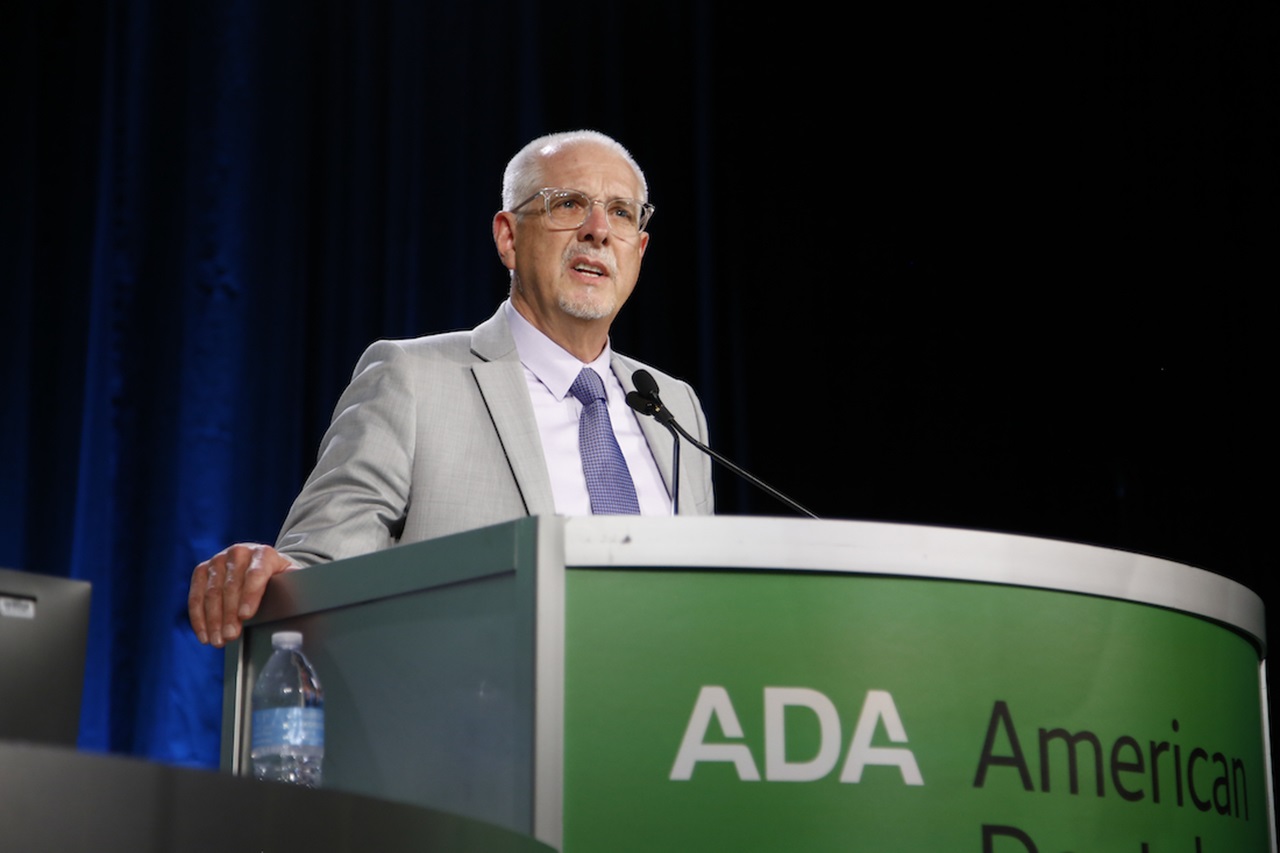 “They say that fortune favors the bold — our ADA is proof of that,” Dr. Shepley said in his address to delegates. “We have known the great fortunes of trust, influence and respect as an organization and profession. Because when it mattered most, we adapted and we made bold moves.”

Quoting President Theodore Roosevelt, he encouraged his fellow dentists to commit to “daring greatly” and to continue to enhance the profession through legislative advocacy, clinical practice guidelines, standards, coding, testing, dental research and thought leadership on the dental economy.

“Boldness is how we’ve built resilience,” said Dr. Shepley, a Baltimore dentist who has been an ADA member for 40 years. “It’s how we’ve navigated every modern public health crisis from HIV to COVID-19. It’s how we’ve survived times of peak inflation — the days when a glut of dental school graduates entered the market, bought homes and opened practices when interest rates were 18% and 19%. I was one of those dentists.”

“The ADA has evolved through it all — learning more, knowing better, doing better and simply going from strength to strength ... all because we have simply dared to try.”

A sense of belonging
Dr. Shepley, who received his dental degree from the West Virginia School of Dentistry, previously served the ADA as president-elect, a 4th District trustee and president of the Maryland State Dental Association.

As a young associate, he said he yearned for connection and camaraderie, which he found with the Baltimore City Dental Society,

“Becoming a member of the ADA family made all the difference. The connections I shared with fellow dentists empowered and inspired me,” Dr. Shepley said.

Now, as ADA president, he wants every dentist to feel that same sense of community.

“Dentists of all backgrounds, races, ethnicities, genders, and all practice modalities deserve an ADA that they genuinely can call home,” said Dr. Shepley, whose words were received by a thunderous round of applause from the delegates.

“If not us, then who?” he asked. “It’s not a rhetorical question. Without the ADA’s leadership, we risk the definition of oral health being determined by lawmakers, insurance companies, or anyone else who may have a stake in the conversation — but not us as the front-line providers of oral health care. “

“We are the ones who need to define oral health,” he said.

One of the ways he hopes to do this is by assembling an ADA task force to address the nation’s over-consumption of sugar and by engaging with other stakeholders, including the Academy of Nutrition and Dietetics, American Diabetes Association and other medical organizations, to be a “powerful voice” for optimal health.

“It’s a bold opportunity for medical-dental and stakeholder collaboration,” he said. “Our work on this subject could resonate for years and decades to come. We can enhance our role as recognized national health leaders in overall health care, by taking a stand and truly making an impact on the overall health of our nation.

He shared an example of education at the micro level from his own practice, where he spends up to two hours with each new patient educating them on how good oral health habits can yield overall benefits and vice versa.

“These visits may be a loss leader in my practice, but they build trust and empower patients to think holistically about well-being,” he said. “Knowledge is power. Both knowledge and power can create a sense of agency and self advocacy.”

He stated that today’s dental students are trained to have an innate sense of their role in whole-body health through medical-dental integration. He hopes the ADA can strengthen its relationships with dental schools and groups like the American Dental Education Association to better serve all dentists and patients. He also spoke of the power of advocacy, calling ADA one of the most important aspects of the Association.

“We educate lawmakers by telling the story of who we are, who we serve, and why our work matters. It’s how we’ve made an impact on local, state, and national legislatures.”

He noted that both education and advocacy are used to help improve challenges in the profession, such as declining reimbursement and staffing issues.

And with the passage of strategic forecasting the ADA has adopted a new process empowering the Association to better adjust to the winds of change.

“With the extraordinary vision of Dr. Cohlmia, we have spent the last year initiating this critical evolution,” he said. “As we keep it up, we are poised to be more agile and efficient as an organization in the coming year. We have the tools to move forward.”

“At the ADA, we are taking care of people. Whether they are patients, whether they are peers,” he said. “This means meeting them where they are and acknowledging our ability to be forces for good. As I officially begin my term as the 159th president of the ADA, I am inspired and grateful to all of you who have been forces for good in our profession and for those in my own life.”

In closing, Dr. Shepley thanked his wife, children and grandchildren along with the staff at his dental practice in Baltimore.

“I feel honored to be in your company, privileged to serve you, and eager to push the boundaries of what’s possible — bolder, braver, and more daring than we have ever been before,” he said.