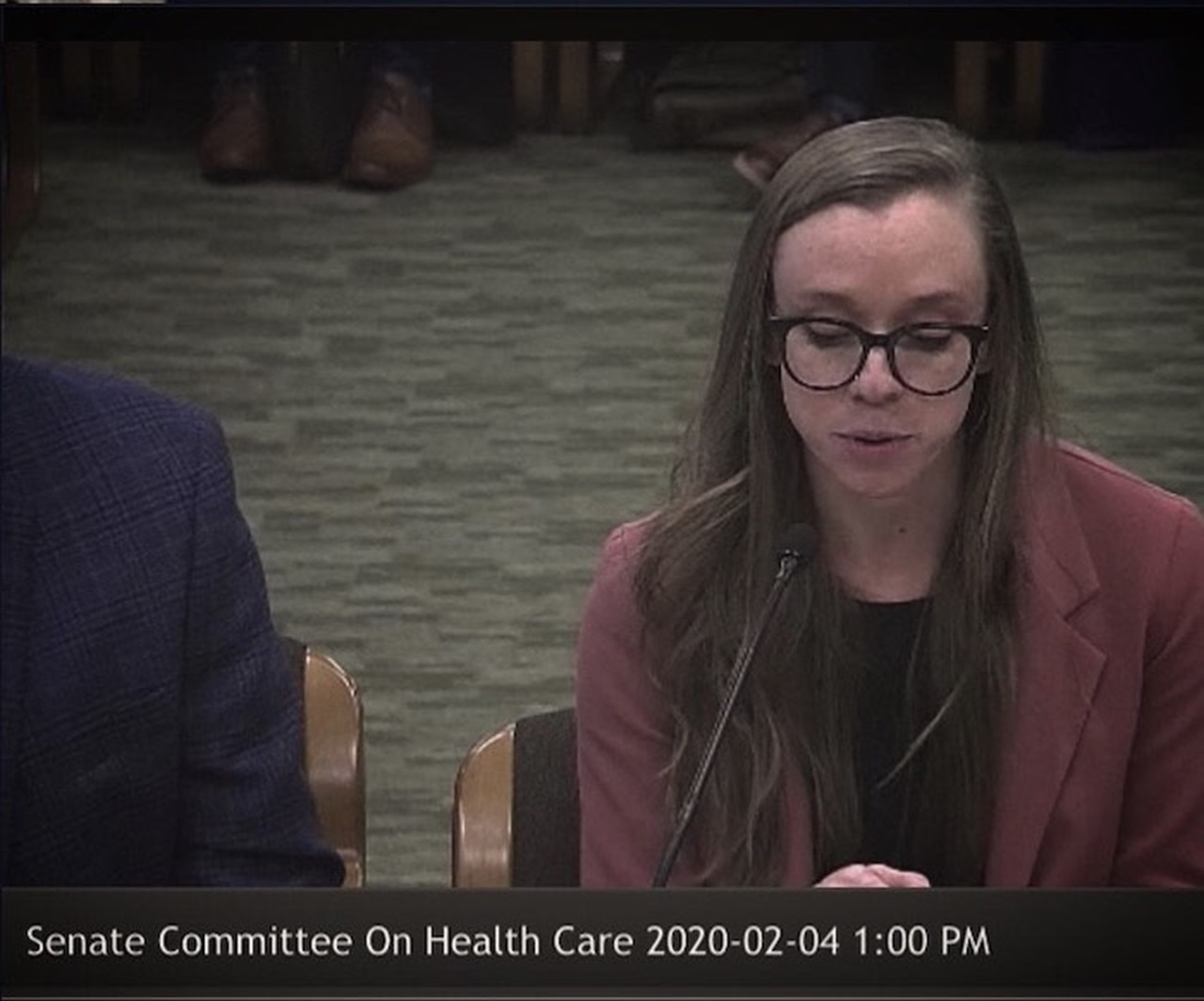 Testify: Dr. Zeller testified in 2020 at the Senate Healthcare and Finance Committee as the dental representative from Oregon Dental Association for the Dental Therapy Licensure Bill.

Editor’s note: Caroline Zeller, D.D.S., of Portland, Oregon, is one of the recipients of this year’s 10 Under 10 Awards, which recognizes new dentists who demonstrate excellence early in their careers. Dr. Zeller has held several leadership positions at the Oregon Dental Association, recently testifying on behalf of the organization at a Senate Healthcare and Finance Committee hearing. Dr. Zeller also produces her own podcast, “Removing the Bite Block,” which seeks to educate listeners on issues affected dentistry and encourage others to help shape profession.  For more information, visit ADA.org/10under10.

Kindness and generosity can be taught and even become generational. Caroline Zeller, D.D.S., had to look no further for an example than her father, who modeled alms giving as needed in health care through his dental practice.

Her father often went above and beyond for people in need of dental care. “He is truly one of the most inspirational humans I’ve ever met,” Dr. Zeller said.

Topeka, Kansas, where her father still maintains a practice and where Dr. Zeller grew up, isn’t a small town. But it was small enough that, as she remembers, “It’s always my dad that would get called.”

That sort of tenacity is undoubtedly why, now in his early 70s, he was voted Kansas Dentist of the Year in 2021. This year, Dr. Zeller mirrored his winning ways by being named among the recipients of the 2021 ADA 10 Under 10 Awards.

Dr. Zeller’s admiration for her father’s approach to his practice and career continues to resonate in her life and in her own attitudes towards dentistry.

“It was less about him doing that work and being a doctor and more about the way that I would see him treat patients and take care of those that didn’t have money,” she said. “He never said no when someone needed something. That’s what I remember. If it needed to be done, if someone was hurting, then the thing you do is take care of it.”
Growing up in Topeka, where she lived up until she relocated to her current home in Portland, Oregon, Dr. Zeller was part of a fairly large family. She is one of four children. Every one in the family works in health care with the majority of them in dentistry. “We definitely have a dental family,” Dr. Zeller said. “My father is an oral surgeon. My older sister is a prosthodontist.”

Her two additional siblings chose other areas of health care. “My younger sister is a psychologist and my brother is an anesthesiologist,” she said.

Her mother is a former respiratory therapist, who segued to teaching preschoolers and raising her own small children, and now works in her husband’s practice.
Aside from her father’s modeling of how to put people above profits locally, he annually traveled abroad to the Dominican Republic to help others in need.

“I went on a bunch of mission trips with him growing up,” Dr. Zeller said. “That’s definitely something that I feel super shaped what I imagined dentistry to be or wanted it to be and what drew me to it.”

She is active in organized dentistry through the Oregon Dental Association, including serving as a board member and ADA delegate at large.

A very strong interest in shaping policy led Dr. Zeller to study toward a Masters in Public Health in health management and policy. She is currently working her way towards earning the degree at Oregon Health & Science University (OHSU).

“I am in the process of probably increasing my time there and decreasing my clinical time at other places,” Dr. Zeller said. “The main reason for both of those things is I’ve come to realize, even though I’ve known it basically the whole time, that there is such an enormous need for what I do and I’m never going to be able to catch up with it. There are so many patients that are always waiting to get this treatment done.”
Rather than feel defeated by overwhelming, unmet need, Dr. Zeller has positioned her efforts to decrease and remove barriers to care across the board. It’s something she ruminates on very deliberately.

“How can I be a part of advocating for policies that would help to improve the access to some of these dental benefits, for instance?” she said. “Increase the number of providers that can provide these different services?”

As a response to those questions, she is highly involved in advocacy efforts at the state level through the Oregon Dental Association. Not content to sit on the sidelines as the profession evolves, Dr. Zeller testified at the Senate Healthcare and Finance Committee as the dental representative from Oregon Dental Association for the Dental Therapy Licensure Bill. “I also have started putting together a series of lectures that are aimed at teaching other general dentists how to increase their scope and how to do just a little bit more oral surgery so that general need can be [met] further beyond me,” she said.

“I’ve come to realize that maybe the biggest impact I could have is to teach the things that I know, to increase the number of individuals that can do this sort of thing because I’m never going to be able to do it all myself. Luckily, I love teaching, and I love deconstructing why and how we do different surgeries. I think that’s made me sort of unique in being able to translate this information to providers that didn’t necessarily receive the same kind of training as I did.”

It’s no wonder her heroes tend to reflect the selflessness she witnessed growing up watching her father — and that she strives to emulate. One of them is the late jurist, Supreme Court Justice Ruth Bader Ginsberg.

“There are so many things that she has said and decisions that she has made that have always really inspired me,” Dr. Zeller said. “I very much follow the idea that if you as a human have specific skills that can be used to help others, then your responsibility, your duty as a human, is to use those skills to help those with less than you. I feel like that’s something that she always sort of preached. She behaved and acted in ways that followed that.”

Life outside of dentistry is full, bright and wide open for Dr. Zeller. “I love being outside,” Dr. Zeller said. “I do a lot of camping. I love to be out on the water. Doing yoga outside is like one of the best things. I love music as well. I grew up singing, playing the piano and playing the ukulele. [I love] anything where I can be really present and in the moment, either outside or associated with music, where I can fall deeply into those moments and enjoy the world and the people.”
Tags
New Dentists Public Health
Related
Date
MOBILE Health Care Act passes House September 29, 2022
10 Under 10: Public dentistry, teaching inspire Texas new dentist September 12, 2022
Pregnant, postpartum Medicaid enrollees to have dental coverage at least 60 days after pregnancy September 23, 2022