10 Under 10: Dr. Fleming returns to her roots to combat oral health care disparities 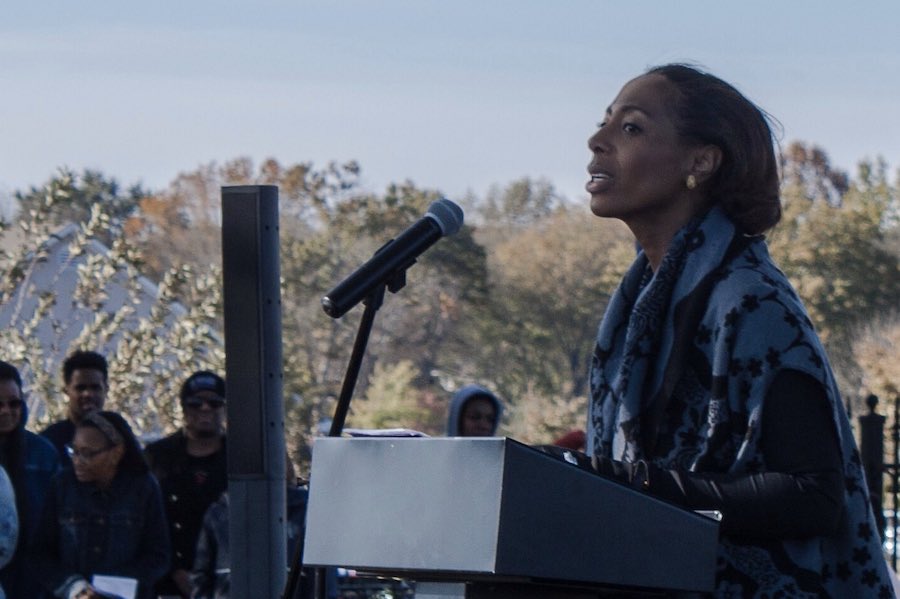 Reclaim: Dr. Eleanor Fleming reads a poem during an unveiling ceremony at a cemetery where enslaved African men, women and children were largely forgotten about at a Civil War site in Franklin, Tenn.

Editor’s note: Eleanor Fleming, D.D.S., Ph.D., of Nashville, Tennessee, is one of the recipients of this year’s 10 Under 10 Awards, which recognizes new dentists who demonstrate excellence early in their careers. Dr. Fleming is a director at the Center for Educational Development and Support at Meharry College and an associate professor at its dental school’s department of dental public health. Previously, Dr. Fleming spent nine years as a dental epidemiologist at the CDC as a commissioned officer in the U.S. Public Health Service to oversee the oral health component of the National Health and Nutrition Examination Survey at the National Center for Health Statistics. For more information, visit ADA.org/10under10.

A grandmother‘s lessons, love and devotion can prepare you to go all around the world, but it will surely also bring you home again.

Dr. Eleanor Fleming is a triple dynamo — an epidemiologist, political scientist and a dentist — and these extraordinary accomplishments hinge on what she learned at her grandmother’s table growing up in Franklin, Tennessee.

“My grandmother taught me that you stand up to beliefs and you do what you’re supposed to do that’s right,” Dr. Fleming said. “You don’t do it for fanfare. You don’t do it for awards. You do it because that’s what you’re supposed to do. I try every day to keep that in mind because if I don’t use my voice and privilege to try to make life, society and community better, especially for people who look like me, then what’s the point?”

Though her grandmother largely raised her, Dr. Fleming’s parents doubled down on these teachings and also helped pave a path for her future. A recipient of the 2021 ADA 10 Under 10 Awards, she credits her successes to their collective influence.

“My mother and father sacrificed so that I could get the best education,” Dr. Fleming said. “They were willing to take on extra jobs to provide for me. So, everything that I do, even in applying for awards like this, it has so little to do with me.”

Dr. Fleming hit the road with those lessons and left behind her hometown to pursue career advancement. Before she left, though, she earned several degrees at Vanderbilt University, including a bachelor’s, master’s, and doctoral degrees in political science, respectively in 2000, 2003 and 2006.

Then, in an unlikely twist, she became a dentist. Dr. Fleming, in fact, had no designs on a career that involved any aspect of the health sciences. She was anything but enamored by math and science. Her decision to pursue dentistry was seemingly happenstance.

“Wanting to be a physician? A dentist? An epidemiologist? None of that stuff was on my radar,” she said. “That’s why I say it’s only by chance, to a certain degree, and I guess by fate that it worked out to where the person who thought they were leaving science and math behind in high school actually pays [her] mortgage as an epidemiologist who understands science.”

She had gone to an event, a talk by Surgeon General Dr. David Satcher, in 2006, and learned about disturbing health disparities in oral health. Dr. Fleming was so shaken by the facts that she chose a path to help combat them.

She earned her dental degree from Meharry Medical College in 2011, with a Robert Wood Johnson Foundation Health Policy Certificate. She later completed a two-year applied epidemiology fellowship at the U.S. Centers for Disease Control as an epidemic intelligence service officer. She earned a master of public health in epidemiology in 2015 from East Tennessee University and completed a dental public health residency at Boston University in 2019.

She was inspired anew to become a dentist by a preventable death in the news in 2007 – a young boy named Deamonte Driver, who couldn’t afford even basic care.

“He died from a cavity,” Dr. Fleming said. “Every time I say it, knowing how easy it is to treat, that he died because his mom could not get a $100 filling, it’s just mind-blowing to me.”

After spending nine years in Atlanta as an epidemiologist at the CDC, Dr. Fleming felt a pull towards a higher calling. Her guardians’ teachings and investments had taken her far, but it was time to go home.

She returned to her Tennessee roots and her beloved alma mater, Meharry Medical College, on a new, more mission-intensive career choice — helping to prepare as many future Black dentists as she can.

Today, she is a director at the college’s Center for Educational Development and Support and an associate professor in the Department of Dental Public Health in the School of Dentistry.

“Howard University and Meharry have the only two [historically Black colleges and universities] dental programs in the country,” Dr. Fleming said. “The reason I became a dentist is because there are so few Black dentists. I’m glad I get to have a teeny-tiny role.”

In that “teeny-tiny role,” she helps to midwife dental careers where there is a great, particular need.

“I was just in a virtual meeting with a student who wants to be a cosmetic dentist. I’m listening to this young student doctor, hearing his passion and knowing in the back of my head that, if it weren’t for Meharry, he may not be here,” Dr. Fleming said.

The tenor of the social, economic and political times have reinforced her mission.

“Part of the reason that I’m here at Meharry Medical College now and not still at CDC is because of this [COVID-19] pandemic, because of seeing the ugliness of racism and white racial supremacy, and realizing that all of that is policy in practice. There was no amount of epidemiology that I could really ever do that would change that.

“I felt that I was at the point in my career where I don’t know everything and never will, but I had enough,” she said. “I knew enough to where it was now time to start paying attention. It was time to not study the data but figure out where there are solutions.”

She’s right at home doing exactly what her grandmother taught her.

“It takes one person supporting another,” Dr. Fleming said. “The same way my grandmother poured into me, I’m trying to pour into this young student doctor and the rest of them.”