The new dentist's guide to pregnancy

Finding a balance while working when pregnant can be challenging — and dentistry is no exception. The New Dentist News talked to three new dentists/mothers about the challenges they faced during their pregnancies and what tips they have for their fellow dentists. 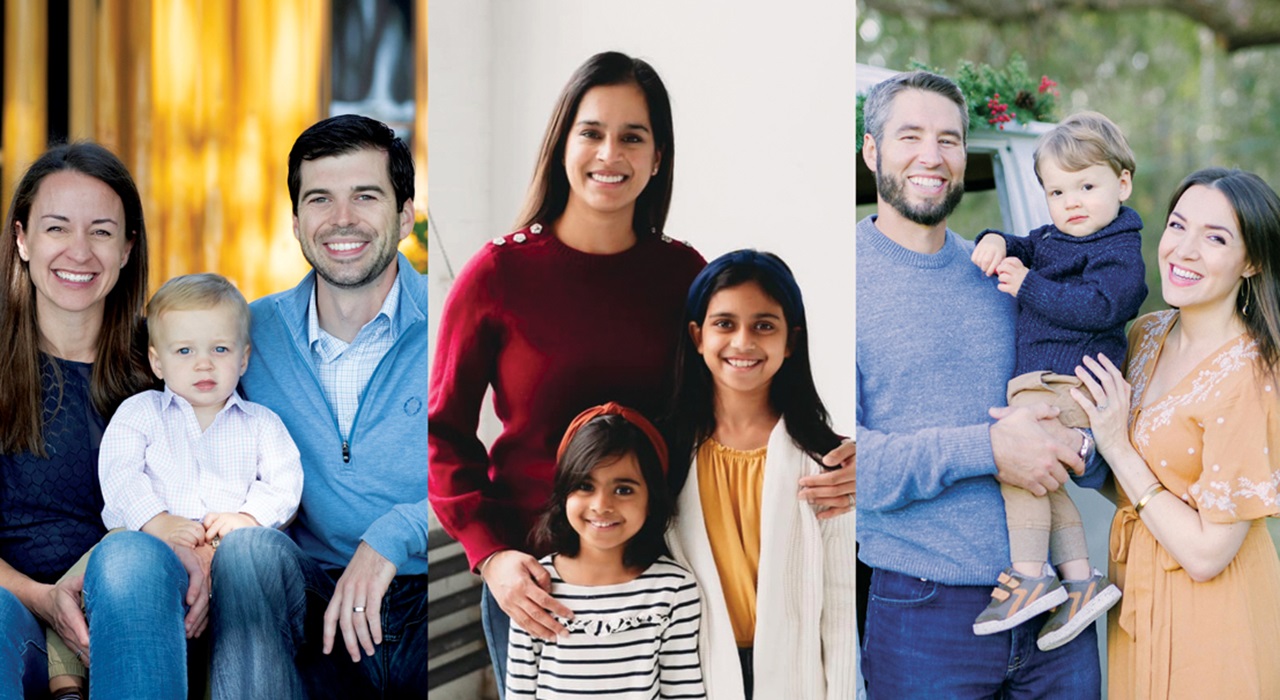 Sharing their stories: From left are Drs. Vitkus and Calnon with their son; Dr. Susarla with her two daughters; and Dr. Currier with her husband and son.

For Lauren Vitkus, D.D.S., planning was key. The central New York orthodontist said getting her solo doctor office ready for her maternity leave was just as important as setting up her nursery at home.

So she planned and planned and planned some more for her baby’s expected July 2020 arrival. She tried to stay optimistic and took advantage of the time she received in March of that year when COVID-19 forced her to shut down her practice for a 12-week period. When the office reopened, there was a scramble of kids and adults with braces and Invisalign who had been without care and needed their appliances tended to. She was thankful she’d have two months to get caught up before her son was due. Her baby boy had other ideas.

“My son's due date was July 21, and he was born on June 26; almost a month early,” she recalled. “I had patients scheduled the next morning, and we ended up at the hospital at 10 p.m. We were calling people from the hospital making sure the schedule got adjusted for the following day. It was certainly a surprise.”

To make things more complicated, baby Patrick needed extra time in the newborn intensive care unit — NICU — before he could come home. She and her husband were the only ones allowed at the hospital, and due to COVID pre-cautions only one parent was allowed in the NICU at a time. “I was blessed to have a supportive team balancing the schedule at the office so I could focus on my son,” she remembers.

Today, Patrick is a healthy and thriving 23-month-old.

Dr. Vitkus said one of the silver linings in her experience is that because Patrick arrived early, she didn't have to deal with some of the end of pregnancy discomforts many of her dental colleagues warned her about, such as back pain and being physically uncomfortable at work.

“He was my first and was born early, so I never got that big and I really did feel I could go about my job pretty normally,” she said. “I think in our story, the biggest stressor was his surprise arrival in the middle of COVID.”

When asked about advice for her fellow dentists, she said she still thinks the best thing any expecting mother can do is to try to plan as much in advance as possible.

“Start thinking about your practice but be prepared to evolve if the plan changes because there’s a lot you can't control,” she said. “There were obviously those hours where it was just, ‘Oh my God, what am I going to do?’ But you’ve got to let that go out the window because it'll figure itself out. Your patients and your team will be super understanding because of how excited they are for you!”

What to expect when expecting in dental school

Pediatric dentist Harlyn Susarla, D.M.D., started her journey to work-life balance during her fourth year of dental school, when her first daughter was born. She was fortunate that the physical symptoms of pregnancy mostly spared her. Instead, she became laser focused on making sure she was up to date on all her school requirements.

“My pregnancy was pretty uneventful up until the end when I learned that I would need to be induced a month early due to a diagnosis of intra-uterine growth restriction,” said Dr. Susarla, who earned her dental degree at the Harvard School of Dental Medicine and completed her pediatric residency at the University of Maryland School of Dentistry. “I had planned all of my requirements up until a certain point, as well as my leave. With the uncertainty surrounding my baby’s health, I had to go back and talk to the school to coordinate. The support and empathy of my faculty mentors and school administration made this difficult situation much more manageable and allowed me to focus on my daughter’s arrival.”

Now in Washington state, Dr. Susarla said she was grateful she had the support of peers who had also become mothers during school, as well as the faculty. She was even the recipient of baby items from one of her professors. She did have to figure out the best places to pump on campus and how to best fit it into her schedule.

“I'm lucky in that I wasn't the sole practitioner where if, if something had happened or I had to miss a day, coverage would be difficult,” she said. “But Harvard was very accommodating and when I graduated, they gave my daughter a graduation Teddy bear and let me walk across stage with her.”

Dr. Susarla says that one of the best things she did was to take a few months off after graduation to spend time bonding with her daughter prior to completing a year of clinical research and applying to pediatric dental residency programs. She also took two months off after having her second daughter, who was born at the tail end of her pediatric dental residency.  She notes that she was, again, fortunate to have mentors in residency and partners in clinical practice who fully supported her as a working mother.

When asked what advice she had for dental students or new dentists just beginning to navigate a pregnancy, she urged them to set realistic expectations and to lean on their support systems.

“It's really important to make sure that you have people that you can trust and lean on, especially if something doesn't go as you had planned. I'm fortunate that I have a very supportive spouse and family.

“As a mother of two girls, it’s been really important to show them that your career doesn't have to be put on hold if you want to have children – the trajectory may change, but it doesn’t need to stop” she continued. “For me, I think the big thing about being a parent and a dentist is finding the balance between my personal and professional lives. Being fulfilled in my career helps me be a better parent and being present for my kids personally helps me connect with my patients and their parents more effectively. Support in both domains is really important and I’ve been fortunate to have this.”

Megan Currier, D.D.S., always knew she wanted to own her own dental practice and dreamed of “building something special” where she could share her passion for dentistry. Her dream came true in September 2018, when she bought a practice in Hammond, Louisiana, from a retiring dentist. An even bigger dream came true in August 2020, when she and her husband became parents to son Vincent.

“Timing is everything, and I believe it may have been a blessing that I had a short time to focus on and grow my newly-found practice into something great without the pressure of raising a child,” Dr. Currier said. “By the time Vincent arrived I felt like the craziness of being a new owner had somewhat faded.”

But while becoming a mother was something she cherished, the physical demands of pregnancy were something else. Extreme nausea. Vomiting. Back pain. Dr. Currier had all of it.

“We tried for a long time to have kids and it was such a surprise for me that my body wasn’t able to be strong and do the things I wanted it to do,” she said. “It took a negative toll in my thinking, to be honest, and it was hard to put on a smile every day and to be excited because I felt guilty complaining. That was probably the hardest part.”

Prayer, meditation and a little yoga helped her get through it. She also received chiropractic care and massages.

“I'm a very faithful person and that is really what I had to do,” she said. “I had to spend some quiet time listening to a Proverbs ministries podcast or doing a Bible study. I also found that yoga was very calming.”

While the physical symptoms took their toll, her attention to detail in planning for her practice paid off. She arranged to have another dentist fill in for her during her leave and planned to take that leave at 37 weeks just in case her OB-GYN was right that baby Vincent could arrive early, which he did at 38 weeks.

She’s planning something similar this May when baby No. 2 is scheduled to arrive. She also said she has been more mentally prepared for pregnancy this time around since she knew what to physically expect. She’s also been juggling building a brand-new office and enjoying every minute!

“Going into this pregnancy I decided to do a Bible study to try to be as much at peace as I can and just handle everything day by day and not get overwhelmed,” she said. “I have learned a lot about perspective and how to be thankful for my ‘problems.’ Like, my body hurts but I am so thankful that my baby is healthy and growing. I am really enjoying it more this time around.”

When asked about advice for other dentists who are new moms, Dr. Currier said, “Embrace the chaos.”

“It may feel like you’re being torn in too many directions, but that’s just proof that life is happening. Prioritize what’s most important to you and let the rest fall away or delegate. You don’t need to have control over every function in your office. Trust your team.

“Also, while I believe being a mother is my most important and fulfilling ‘job’... I believe we, as mothers, need to lose the mom guilt about having a career. The best thing you can give your kids is a fulfilled and happy mother. I want my children to grow up believing they can serve others and make a difference in peoples’ lives. They will believe it when they see me do it.”

The ADA's Guidelines for Practice Success, Managing Pregnancy module is full of information for dentists. Find all of the resources at ADA.org/GPSPregnancy.