While the idea that oral bacteria may contribute to disease in other parts of the body has been discussed since at least the late 19th century,1 for the last several decades a number of systemic diseases have been associated with oral health, particularly cardiovascular diseases and diabetes.2-5 There are two mechanisms which have been hypothesized to explain the observed associations. Firstly, chronic inflammation in the oral cavity may increase levels of inflammatory markers in the bloodstream affecting immune response, or adding to the body’s general burden of disease. Secondly, the oral cavity may act as a reservoir for pathogenic bacteria that can enter the bloodstream and affect distant-site or systemic pathologies (systemic endotoxemia or bacteremia).

In 2000, the Surgeon General issued a report on the status of oral health in the US, recognizing an association between periodontal diseases and cardiovascular health, stroke, diabetes, and adverse pregnancy outcomes, and calling for more research to determine whether causation may be established.4, 5 Despite the lack of evidence of a causal link between periodontal disease and other system health concerns, the report emphasized that “oral health is integral to general health. You cannot be healthy without oral health.”4

A series of articles in a 2006 JADA supplement addressed the association of periodontal disease to diabetes,3 cardiovascular health,2 pregnancy outcomes,6 and pneumonia.7 The body of research has grown since then, and while the links between oral and systemic health have become more clear, it remains difficult to ascribe causality.8, 9

In 2020, the ADA passed Resolution 84H-2020, stating that, especially in light of the COVID-19 pandemic, “dentistry is essential and should remain an independent health care profession that safeguards, promotes and provides care for the health of the public, which may be in collaboration with other healthcare professionals.”  A similar message was released in 2021 by the World Dental Federation (FDI) to policymakers, which called “for oral health to be considered an essential element of general health and well-being.”

The Surgeon General’s report of 2000 was updated in 2021, echoing the original statement while stressing the social and behavioral inequities that limit access to care.10 The report provides a call to action, urging policymakers, healthcare professionals, and the community to “work together to provide integrated oral, medical, and behavioral health care” and to address “social, economic, or other systemic inequities that affect oral health behaviors and access to care.”10

Do these relationships tell us about causality or intervention?

Significant associations between oral health status and a number of systemic diseases have been established, including, but not limited to, cardiovascular diseases, Alzheimer’s disease and dementia, obesity, diabetes and metabolic disorders, rheumatoid arthritis, and several cancers.11-20 Most researchers point out that despite sometimes strong relationships between oral diseases and systemic conditions, such associations do not imply causation and may be biased by confounding factors, because “any association could potentially be due to another factor that influences both conditions.”21

Periodontal disease is common,20, 22 with prevalence of up to 50% overall.13, 23, 24 Similarly, according to the Centers for Disease Control and Prevention (CDC), about 47% of Americans have at least one risk factor for heart disease, such as diabetes, obesity, poor diet, alcohol abuse, or smoking.25 There is a significant overlap between factors seen to increase risk of periodontal disease and heart disease.26 People who smoke are not only at increased risk of gum disease, they have a higher risk for heart disease and stroke, as well as lung and other cancers.27 In addition, babies born to women who smoke are at increased risk of being low birth weight.28 Two or more diseases occurring in the same person, commonly referred to as comorbidities, may result from the same influencing factor, for example, smoking; people who smoke are at higher risk for heart disease and stroke, as well as gum disease.8, 9, 11, 26, 29, 30

Behavioral and social disorders including interpersonal violence and elder abuse, or conditions involving chronic pain such as osteoarthritis, or motor control such as multiple sclerosis (MS), present a number of symptoms that can adversely affect oral health care and treatment, and may provide challenges to the dental clinician.10, 32

The relationship between diabetes and periodontal disease is seen to be bidirectional, meaning that hyperglycemia affects oral health while periodontitis affects glycemic control (e.g., increased HbA1c).33-36 Obesity and other systemic inflammatory conditions, often exacerbated by stress or smoking and poor oral health maintenance, may contribute to periodontal breakdown and osteoclastic activity.11, 15

As such comorbidities or “multimorbidities” are increasing,30 researchers are advocating an integrated approach to health care, as emphasized in recent reports from the FDI, the ADA, and the Surgeon General. A thorough review of the patient’s medical and dental history prior to treatment planning, as well as consultation with other healthcare providers, may be helpful to supporting an integrated approach to multimorbidities.11, 18, 32

Gingivitis is very common among children, affecting approximately 70% of pediatric patients.37, 38 Generalized periodontitis in prepubescent children, however, may be a manifestation of a systemic disease (e.g., congenital or hematological). Referring a child with generalized periodontitis to a physician may help determine whether the periodontitis is a manifestation of a systemic disease.37-41 As seen in the table, periodontal disease manifest in a child may be the sentinel symptom of a more serious condition.

Whether the periodontal symptoms are plaque-induced or systemic, early diagnosis and treatment is essential, although the success of periodontal therapy may be inhibited by systemic disease.42 Delaying treatment of periodontal disease in children to facilitate differential diagnosis may increase the risk of bone loss. 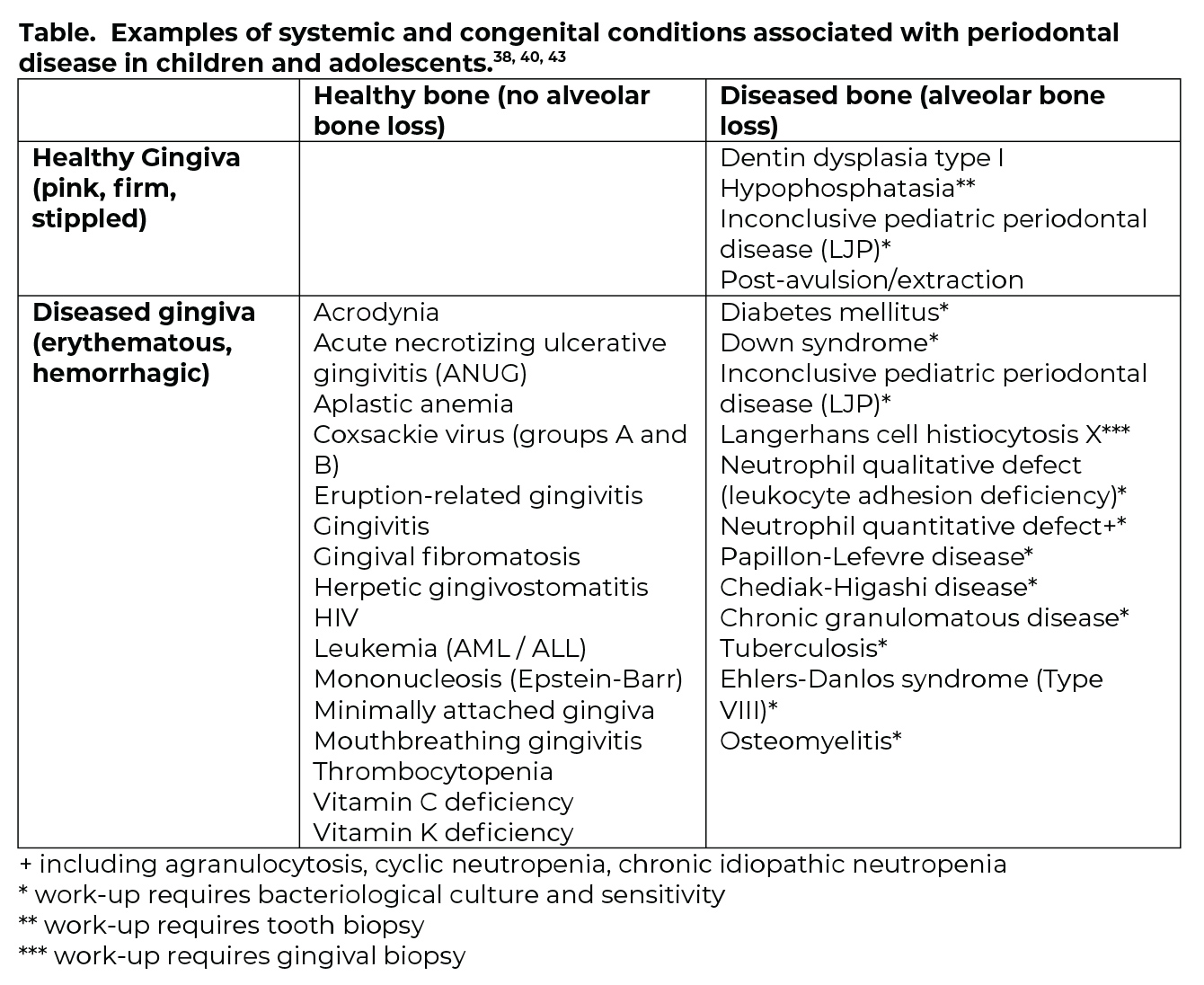 The patient education brochures listed below can be ordered online through the ADA Store:

For the Dental Patient is a JADA column that is geared toward patient education and intended to facilitate discussion between dentists and patients.

Content on this Oral Health Topic page is for informational purposes only. Content is neither intended to nor does it establish a standard of care or the official policy or position of the ADA; and is not a substitute for professional judgment, advice, diagnosis, or treatment. ADA is not responsible for information on external websites linked to this resource.